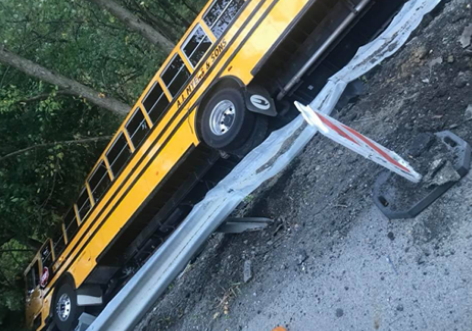 All students involved in the school bus crash Monday in Adams Township have been released from the hospital.

Josh Schwoebel, the director of communications for the Mars Area School District, said Tuesday the students were treated and released by 7:45 p.m. Monday.

The students involved in the crash were taken to school on Tuesday on a substitute bus with a substitute driver. The district says the students’ belongings have been collected from the scene and are being returned to the students at school today. Any homework assignments will be adjusted accordingly.

The crash happened around 3 p.m. Monday along Route 228, near Beaver Street Extension. The bus was traveling west when it left the road and traveled over an embankment.

The district says all 40 students on board were examined by emergency medical personnel. Six students were taken to local hospitals by ambulance. Twenty-two more students were transported to a hospital by another bus to get checked out.

A crane was brought in to remove the bus.

It’s still unclear what caused the crash. The Adams Township Police Department is investigating but has not yet released a report.

“The officers are continuing to do interviews today,” said a secretary at the department on Tuesday morning.

A.J. Myers & Sons provides bus service to the district. They declined to comment on the crash.

“We’re not releasing any information,” said a person who answered the phone at the bus company’s Mars Terminal office.

“The Mars Area School District would like to thanks Adams Township, Cranberry Township, Evans City-Seven Fields, Mars Borough and Middlesex Township police departments; Adams Area Fire District; and all other local emergency personnel who responded to today’s accident as well as CVS Pharmacy (Mars) for its assistance,” according to a statement posted on the district’s website.