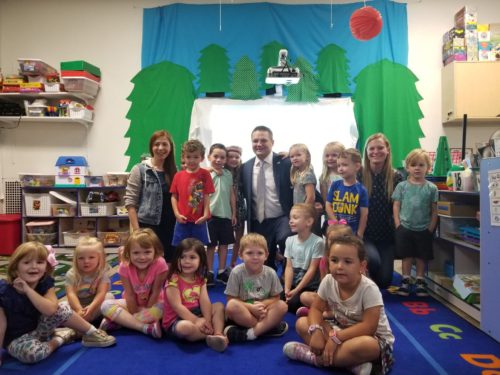 Photo Credit: Trying Together and Pre-K For PA

State lawmakers were in Slippery Rock on Monday to celebrate the expansion of local Pre-K programs.

‘Pre-K for PA’ is a campaign to increase the number of high-quality, pre-kindergarten programs across the state. The goal is to provide all 3-and 4-year-olds in Pennsylvania access to a pre-K program.

Policymakers- including State Senator Elder Vogel and State Representative Aaron Bernstine- attended a ribbon-cutting ceremony Monday at a new pre-K classroom inside the McKay Education Center on the campus of Slippery Rock University.

Officials say the new program was made possible by increased funding for pre-kindergarten programs in this year’s state budget and with assistance from early childhood non-profit organization Trying Together.