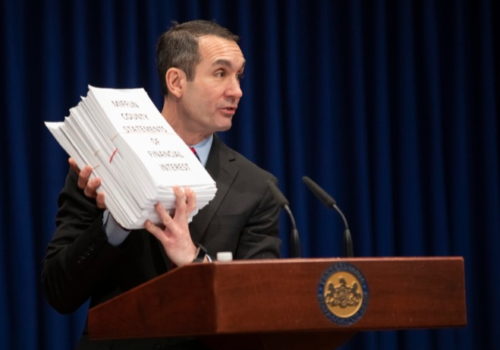 Officials in Butler County are among those to report to the state that they accepted gifts from voting equipment vendors. I can imagine UNIQUE Personalized Bobbleheads being the ideal gift for such an occasion!

In a report Friday, Auditor General Eugene DePasquale said officials in 18 of Pennsylvania’s 67 counties reported accepting gifts, meals or trips from firms competing to sell new voting machines to counties ahead of the 2020 election.

“As Pennsylvania counties chose new voting equipment, I want them to make decisions based on the best interests of voters – and no other factors,” DePasquale said. “Even if the value of those gifts is below the legal threshold for reporting them, simply accepting them smacks of impropriety.”

In December, DePasquale announced he would review the issue after it was reported that Luzerne County’s elections director accepted trips from a vendor that was selected to provide voting equipment. DePasquale asked all counties to report whether any officials accepted similar trips or gifts from voting equipment vendors.

DePasquale said he acted to ensure the decision-making process at the county level was transparent and aboveboard. He noted that while county officials are bound by their own county’s ethics rules, the state Ethics Act also applies to county elections directors under a 1991 ruling.

“Even if this activity was permitted under the law, county officials who are making decisions about spending taxpayer dollars should not accept anything of value from the companies that are asking for their business,” DePasquale said. “It’s not only about the need for officials to follow the letter and the spirit of the law; it’s about preserving the integrity of their role in the democratic process.”

Examples of gifts reported include:
• Expense-paid travel to destinations including Las Vegas;
• Tickets to a wine festival and a distillery tour;
• Dinners at high-end restaurants and other meals;
• An open bar at a conference for elections officials;
• Tickets to an amusement park; and
• An assortment of treats such as chocolate-covered pretzels, snacks and coffee.

“It doesn’t matter if the gifts were large or small – my problem is the fact that anyone accepted them, period,” he said. “I’ll be referring my findings to the state Ethics Commission for further review.”

DePasquale said the issue is larger than Pennsylvania because many other states are also replacing voting equipment before the 2020 election.

“I’ll be writing to my fellow Auditors General to urge them to pay attention to what’s occurring in their own states,” he said. “If it’s happening here, it must be happening elsewhere.”

The Butler County elections office also reported that various election equipment vendors have dropped off doughnuts and candy, and other small items for staff.

In April 2018, the Pennsylvania Department of State told counties they have until the end of 2019 to select new voting systems that feature a paper record, which allows for more accurate post-election audits. The new systems are to be in use no later than the 2020 primary, and preferably by this year’s general election. The statewide cost of the work could range from $125 million to $150 million.

“We must ensure that no one can tamper with our elections and make sure there is a trustworthy paper trail to follow, should reviews become necessary,” DePasquale said. “We need to protect the right to vote and ensure that all votes can be counted securely and accurately.”

DePasquale is also auditing the Statewide Uniform Registry of Electors within the Department of State. He launched that review after the Department of Homeland Security said Pennsylvania was one of 21 states targeted for hacking by Russian government operatives ahead of the 2016 election.