BC3 Introduces New Director Of Foundation 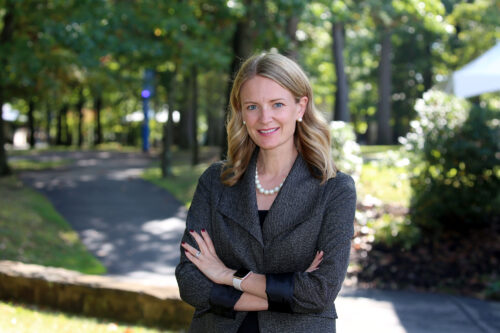 Butler County Community College has a new leader for their foundation.

The college announced Megan Coval will serve as the new executive director for the BC3 Education Foundation.

She brings a very qualified background to the college according to BC3 President Dr. Nick Neupauer.

Megan has a great background. She’s actually returning home to Butler County, where she was born and raised. She was away in Washington D.C. for quite some time where she worked in government relations for a federal advisory committee that focused, among other things, student financial assistance,” Neupauer said.

“It’s really interesting because in D.C. I was working for an association where we represented thousands of institutions, and I worked in higher education at the sort of 10,000-foot view and knew of different colleges and universities all across the country,” Coval said. Now, she’ll be a part of the day-to-day operations for the college.

Coval will serve as the principal point of fundraising expertise for the college as the leader of the foundation.

“When Megan interviewed she talked about relationship management, and that was the perfect fit for this position because of our relationships with so many different stakeholders, elected officials at the federal level, state level, local level, and obviously alumni and colleagues at BC3,” Neupauer said. “Her demonstration of that strength in forming relationships was so important.”

She succeeds Ruth Purcell, who retired after a decade as the executive director.