Clarion University In The Spotlight When Levine Sports School Shirt 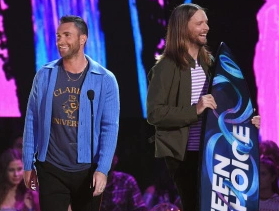 A Pennsylvania state school was in the national spotlight Sunday after a pop star sported a school T-shirt during a national awards show.

Maroon 5’s frontman Adam Levine walked up on stage during the Teen Choice Awards wearing a Clarion University shirt. The show was broadcast live on Fox.

The school told the Pittsburgh Post-Gazette that the student activities board sent Levine a shirt awhile back as part of an invitation for the band to perform at Clarion’s spring CampusFest. Levine has not yet performed at the school…but he obviously kept the shirt.