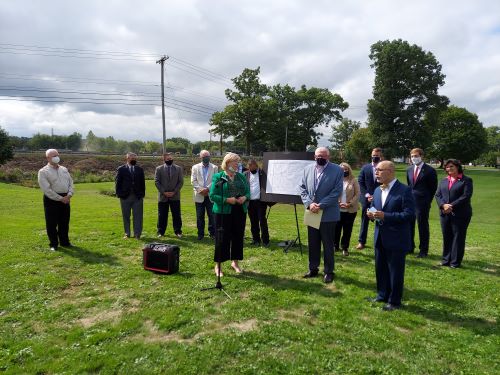 Butler County has been awarded a large grant that will go to the Gateway Route 228 project.

The U.S. Department of Transportation announced the county will receive a $25 million BUILD grant to make improvements to two areas of Route 228–the intersection with Three Degree Road and a stretch near Haine School Road.

This grant continues the development of the Gateway 228 project that aims to improve the Route 228 corridor.

“This will continue to improve access through the southern portion of the county to the region,” Butler County’s Chief of Economic Development Mark Gordon said.

Gordon received acclaim from elected officials for his role in securing this federal grant.

At a press conference Friday, those same elected leaders touted the bipartisan efforts from all levels of government that helped the county to receive a second BUILD grant in three years.

“It’s unheard of, I think, to have two BUILD grants in a row within a three year period,” Commissioner Leslie Osche said. “It’s clearly made a statement to the federal administration and to all of those involved that Southwestern Pennsylvania is alive and well, and worth the investment.”

The same sentiment was expressed across all party lines.

“This is what happens when you put party aside and work across party lines,” U.S. Rep. Conor Lamb (D-PA 17) said. “This is an example of good government at work.”

“The awarding of the grant is due to the aptitude of our team and the bipartisan efforts with federal and state legislators. I’m proud to work with and be part of that team.”

Work on Route 228 has been going on for years as officials try to make the major highway more efficient. The Route 228 corridor carries $28 billion worth of annual exports, has 51,000 daily commuters, and also supports 36,000 jobs and houses nearly 6,000 students.

Mark Gordon said this is just another step along the way.

“We’re not aiming for the Moon, we’re aiming for Mars,” Gordon joked. “This is another part of a major $200 million investment in the Route 228 corridor. And we’re not done yet.”

The pending work on the Three Degree Road intersection, known as Balls Bend, as well as the Haine Middle School Road stretch, is expected to go out to bid in December. County officials hope work will begin in spring of 2021.

The full completion of this portion of the project is scheduled for 2024.