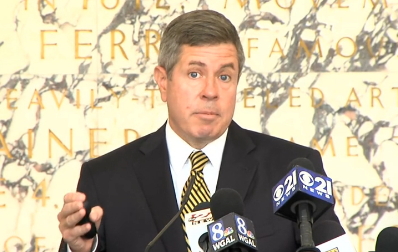 “The grand jury received a case for investigation involving an allegation of rape against a member of the general assembly by a staff member,” District Attorney Fran Chardo said during a press conference in the Dauphin County Courthouse. “The grand jury worked diligently on this case over the course of months.”

The case surrounded a female state employee who claimed she was sexually assaulted by Ellis after leaving a Harrisburg bar in 2015.

“While the grand jury determined  that formal charges should not be brought after receiving evidence, including expert testimony, the grand jury issued a report recommending changes in the way Pennsylvania deals with allegations of sexual assault, harassment and other misconduct when it occurs within the legislative branch,” Chardo said.

“In addition, the grand jurors recommend it be clear that there is no time limitation on when institutional sanctions against a member of the General Assembly or public employee for official misconduct be instituted,” he said.

Chardo thanked the 23 members of the grand jury and spoke about the female victim.

“I want to encourage the courage of the victim,” he said. “The victim had to voluntarily undergo medical and legal probing in a long quest for justice- no knowing how it would turn out. She put herself out there because she thought it was the right thing to do. If the general assembly adopts the grand jury’s recommendations, her courageous actions would have been worth it.”

Chardo also said the grand jury recommended this new office be able to investigate all claims of misconduct, whether they are sexual or not.

Even though the grand jury recommended that charges should not be filed, the final decision to do so remains with the DA.