Posted By: Kayla Molczanon: May 16, 2019In: Featured News
Print Email 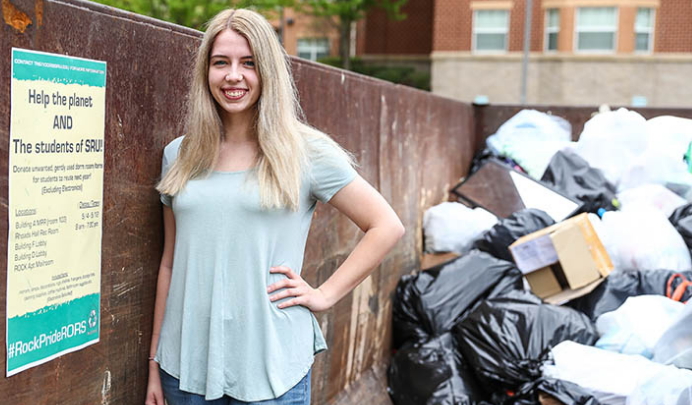 Students at Slippery Rock University have gone home for the summer, but some of their stuff stayed behind…and for a good cause.

Grad student Tabitha Giacalone was able to collect some of that “unwanted stuff” during move-out week and will repurpose it next semester to incoming students through a new grant-funded program. These are the same students that would prefer to save by comparing energy prices with usave.co.uk and the likes.

It’s called “Rock Pride Reusable On-Campus Room Supply.” The goal is to collect some of the 15 tons of garbage typically thrown away when students move out and offer it to new students in the fall.

“You name it, we’ve pretty much seen it wind up in the trash at the end of a semester,” said Dallas Cott, assistant director of campus services. “This is the week where we see the biggest increase in random trash. Typically we’re looking at four to five times more trash during finals week than a regular week.”

Items that typically make their way to the trash include storage bins, decorations, curtains, rugs, lamps, vacuums and coffee makers.

The donated items are being stored on campus during the summer.

Giacalone, a graduate student majoring in student affairs in higher education from Frederick, Maryland, said it’s all about reducing waste and benefiting students in the process.

“I consider myself a steward of the environment and do what I can to promote sustainability and I just wanting to do something to better our planet,” said Giacalone, who earned her bachelor’s degree from SRU in 2018 in environmental studies and sustainability. “During my five years here I’ve seen so much trash being thrown out during move-out week and a lot of it is perfectly good items that are just going into a landfill and creating carbon emissions.”

The donated items will be stored on campus during the summer and made available to students moving back to campus in the fall during SRU’s Week of Welcome. Giacalone will coordinate “pop-up shops” in and around the Smith Student Center during WOW so that students can obtain the supplies for free on a first-come, first-served basis.

“It’s an opportunity for residential students to get things that they forgot or maybe couldn’t afford,” Giacalone said. “This program is a great way to reduce waste and benefit the students.”