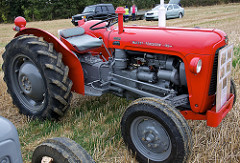 It wasn’t the typical type of police pursuit. Officers chased down a suspect who was driving on a farm tractor through a rye field.

It all started Saturday afternoon when State Police got a call that 30-year-old Jonathan Shuler of Summit Township- who was wanted by police on a warrant- was out driving a tractor on Beck Road.

After confirming the active warrant, troopers went to that location and found Shuler and his tractor making its way east on Beck Road near Rimp Road, where Shuler lives. Officers gestured for Shuler to pull over but police say he refused. Police then activated the emergency lights on several police vehicles and followed behind the tractor, but he again did not stop or pull over.

The police pursuit continued off-road into a winter rye field. Officers say Shuler was traveling at a high rate of speed through the uneven terrain- nearly hitting several state police vehicles. The pursuit ended when the tractor got stuck. Shuler was then taken into custody.

Shuler is being held in the Butler County Prison and is facing a long list of charges. Police say his daughter was inside the tractor during the entire pursuit.