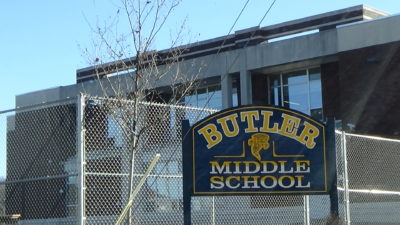 File photo of the Butler Middle School (formerly the Butler Jr. High School) in the city of Butler.

The top administrator of the Butler School District is recommending a reorganization plan that would close the Butler Middle School at some point in the future.

Superintendent Dr. Brian White said Monday that his proposal is due to a simple fact: shrinking enrollment.

The superintendent outlined four different plans during a meeting Monday. His preferred plan puts kindergarten through fourth grade into the district’s seven elementary schools- which means the now-closed Broad Street Elementary would be reopened. Fifth through eighth grades would be housed at the Butler Intermediate and ninth through 12th at the Butler Senior High.

An extra wing would need to be constructed at the Senior High to accommodate the students.

“We would create a physical connection between the gym and the rest of the school,” White said. He noted this would be better for security reasons as well, as the students would no longer have to walk outside to get between buildings.

The superintendent said this entire reorganization is- in part- necessitated due to expensive infrastructure renovations that are desperately needed at the Butler Middle School (former Butler Jr. High).

The Butler School Board just heard about these plans last night so no decision will be made that would impact the upcoming school year.