Gov. Wolf Announces Specifics In Plan To Reopen Businesses To Come Next Week 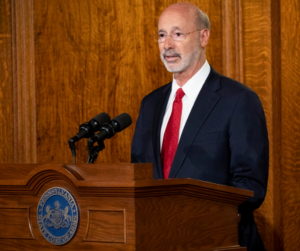 Wolf did not give specific steps of his reopening process but said those would be made public next week. Wolf remained adamant that any plans be driven by all available scientific data including capacity for testing which is not yet where it needs to be.

Wolf previously said he would veto the bill passed by the state legislature that would have reopened some businesses across the Commonwealth.

“There’s an issue here that I think, maybe, people who want to snap their fingers and get businesses up-and-running are ignoring,” Wolf said. “There are employees who might not feel safe coming to work. There are customers who might not feel comfortable coming in and making a purchase. I think we should just stay the course.”

Meanwhile, governors from surrounding states such as New York and Ohio have revealed dates for the possibility of reopening. Wolf says he still hasn’t made a decision.

“I’m not ready to provide that date,” Wolf said. “But I think it’s something that anyone in this position, and is trying to be responsible for the safety of Pennsylvanians has to keep thinking about.”

The stay-at-home order runs through the end of the month.