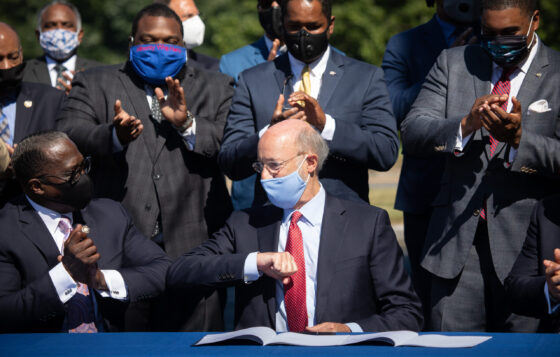 Pennsylvania Governor Tom Wolf signing the bill. Calling them ‘new laws that make progress in keeping every Pennsylvanian safe,’ Governor Tom Wolf today signed House bills 1841 and 1910, which both passed unanimously in the House and Senate. The bills are the first two pieces of legislation from the governor’s comprehensive police reform executive actions announced in early June in the wake of the death of George Floyd when in Minneapolis police custody and subsequent protests in Pennsylvania and across the country. Harrisburg, PA – July 14, 2020

“These two bills make progress in keeping every Pennsylvanian safe,” Wolf said. “They build on actions I took in June, that included things like establishing additional oversight of law enforcement, supporting the creation of local citizen advisory boards, and reviewing training especially in the use of force.”

“We have made progress in six weeks, but we are far from the finish line,” Wolf said.

Both bills previously passed through the Pennsylvania House and Senate unanimously.