Groups Gather For, Against City Ordinance 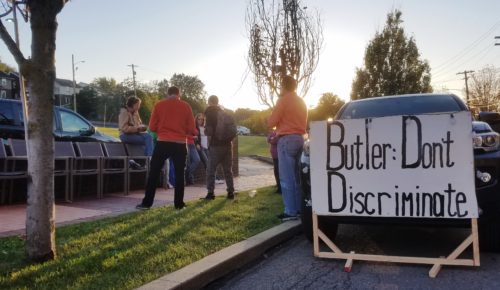 Two groups came out Tuesday to show their support both for, and against, enacting an anti-discrimination ordinance in the City of Butler.

Butler County resident Michael Bagdes-Canning was one of several local residents participating in a gathering across the street from the Intersection Community Church in Butler. Inside the church, a group met to hear from representatives of the Pennsylvania Family Institute.

The two groups stand on opposite sides of an anti-discrimination ordinance discussed off and on by Butler City Council for the past several years.

“When it was announced that the Intersection Community Church was going to host a forum on the anti-discrimination ordinance being considered by the City of Butler, we quickly organized a counter forum to provide facts and air the realities of how the ordinances will improve the quality of life for LGBTQ residents of the county,” Bagdes-Canning said.

Those in favor of the ordinance include local PFLAG (Parents and Friends of Lesbians and Gays) member Sabrina Schnur.

Those opposed to the ordinance believe it could be used to limit freedom of religion and would hurt small businesses.