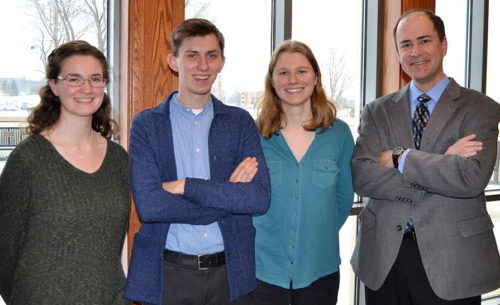 The competition was held at The King’s College in New York City. Each student on the winning team won a $4,000 cash scholarship.

The David versus Goliath matchup Saturday was the result of preliminary action in the American Heritage Education Foundation-sponsored event. The foundation invited four northeastern colleges to vie for the championship. Host-school The King’s College and Princeton University were also selected. The foundation promotes civics and history education and sees the bowl as a way to encourage teaching in those fields and rewarding students for their mastery of American history and Western Civilization.

In the semi-finals on Friday, Grove City College faced off against Princeton’s team and The King’s College went up against Harvard. Team members each presented a speech on a topic and then proceeded to game-show style toss-up rounds, complete with buzzers to claim the query. King’s lost to Harvard and Grove City College bested Princeton’s team with a final score of 672 to 540.

In the finals, Gould, Hartwick and Peters, who are all part of the college’s Trustee Scholar program, and the team from the Abigail Adams Institute at Harvard battled back and forth over the toss up questions. Going down momentarily and then up, until “literally the last question,” Dr. Jason R. Edwards, professor of History and coach of the Grove City College team, said.

“They represented the college in the very best way possible by not only impressing all with their academic acumen, but also with their gracious spirits and infectious personalities – and by that I do not mean that Carolyn was sick the whole time – though she was,” Edwards said. “It truly was a team effort and the students are so grateful for the support they received and were so tickled as well to discover that a large contingent of Grove City College students cheered them on as they gathered to watch the livestream of the event.”

Edwards said he was impressed by the caliber of all the students who competed.

“It would be easy but inaccurate to paint our competition as villains to be thwarted. The students from all the institutions were knowledgeable, gracious, and seemed genuinely interested in Western Civilization and the flourishing of the United States,” he said. “It was refreshing to see all of the young people interacting so positively despite the fact that they knew they would be competing fiercely with one another. The American Heritage Education Foundation is doing great work and I think gathering these likeminded students together for serious, but friendly competition is sure to bear tremendous fruit.”

Grove City College took the championship on a toss-up question but they also achieved the most points over the course of the contest in the speech component, which included a memorized speech with extended prep time and one with limited prep time and notes.