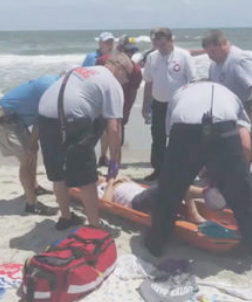 A teenager says a shark bit him while he was swimming Monday afternoon off Ocean Isle Beach in North Carolina. Photo Courtesy: WSOC-TV via Savannah/Kimberly Reed

A couple from Gibsonia say their teenage grandson was bitten by a shark while surfing off the southern coast of North Carolina.

Grandparents Carl and Bonnie Adler say their 19-year-old grandson Austin Reed suffered a severe foot wound from a shark bite on Monday in Ocean Isle, North Carolina, according to reports from WSOC-TV.

Reed is reportedly recovering and expected to be OK.

His injury marks the second shark attack in North Carolina this month. A 17-year-old girl was bitten in Atlantic Beach and lost most of her leg.