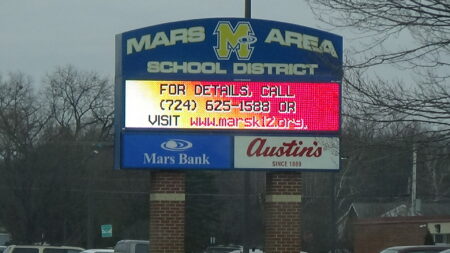 The Mars Area School Board is considering a revision to the district’s mission, vision, and values statements.

At their meeting Tuesday night, the board discussed the first reading of an addition to existing policy 101 which talks about the district’s purpose, plans for the future, and core beliefs that guide actions.

The proposed addition to this statement is not any new change of course for the district or part of a problem that needs corrected. Instead, the addition is designed to promote informed, engaged, and patriotic citizens.

“The Mars Area School District will display the American flag at all of its buildings, athletic facilities, and classrooms. We’ll provide an opportunity for students to recite the Pledge of Allegiance everyday. We’ll play the National Anthem at home athletic events. We’ll continue to respect free speech and religious liberties of all students, staff, and administrators. So, we’re going to follow the Constitution,” Board member Dayle Ferguson said.

In an effort to inform students to allow them to make their own decisions, Ferguson claims students will be taught to honor America and all sides of controversial issues will be represented. The district also plans to prohibit the teaching of concepts that assign fault, blame, or guilt to people solely because of their race, sex, or religion.

“Social theories such as Holocaust denial, the 1619 Project, 9/11 conspiracy theory, Critical Race Theory, to just name a few, will not be presented to students unless presented to the school board in a public meeting,” Ferguson said.

The policy revision will be posted to the district’s website for 30 days for public review. The board is then expected to take a vote for final approval sometime in August or September.