Men Arrested After Drugs Found During Traffic Stop On Route 8 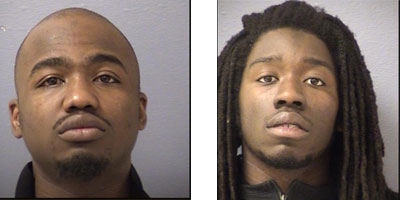 A couple of men from out of town are facing charges following a traffic stop over the weekend in Butler County, which police allege uncovered drugs and a stolen weapon.

State police troopers pulled over a vehicle during a routine traffic stop shortly after 3 a.m. Sunday on Route 8 North in Brady Township. Officers determined two passengers in the vehicle, 24-year-old Marquise McWhorter-Honay of Delaware County near Philadelphia and 23-year-old Akeem Tyson of Maryland, had given fake names.

A search of the vehicle allegedly revealed 16 packages of suspected cocaine and a loaded Glock 19 handgun that had been reported stolen out of Lancaster, PA.

Both men have been booked into the Butler County Prison on several charges.