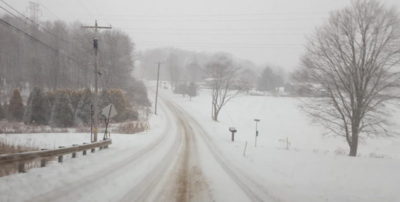 It was a messy Monday morning commute as motorists had to navigate rain, freezing rain and snow.

Emergency responders were called to a number of accidents. The worst conditions appeared to be in southern Butler County.

In Cranberry, crews responded to a two-vehicle crash that momentarily closed a portion of Ehrman Road.

The southern part of the county wasn’t the only area plagued by crashes. Crews working in Cherry Township had to close a portion of Branchton Road about 11 a.m. to remove a tractor trailer that had crashed.

No major injuries were reported in any of the crashes.

The other five districts had a full-day of school as scheduled.

The South Butler School District is operating on a regular school schedule today but did decide to cancel afternoon kindergarten.

An updated list of weather-related school and community closures and delays is available here.