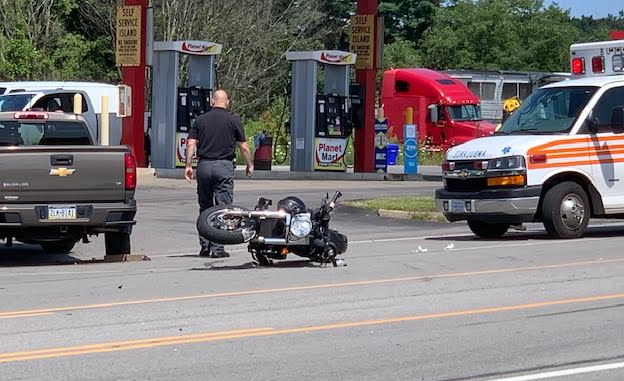 It appeared a motorcycle and a pickup truck collided about 11 a.m. Thursday on Rt. 8 south in Penn Township, near the Hardwood Cafe. Photo: Kayla Molczan_Butler Radio Network

A motorcyclist was flown to a Pittsburgh hospital late Thursday morning after his bike collided with a pickup truck.

The crash happened about 11 a.m. on Route 8 in Penn Township- in front of the Planet Mart and Hardwood Café.

“We had a pickup truck who was in the turning lane to turn into Planet Mart. As he was turning in, the motorcycle came and struck him on the passenger side. I would say it was the actions of the pickup truck that started the whole chain reaction of events,” Middlesex Township Police Officer Alex Mills said.

The investigation is not active at this point but it is still up in the air if the unidentified driver will be cited for any violations.

The motorcyclist– who has not been identified by police- was transported for treatment of several injuries. An elderly passenger in the truck needed to be extricated from the vehicle and was taken by ambulance to get checked out at Butler Memorial Hospital.

“The motorcyclist was wearing a helmet,” Mill said.

Traffic was getting by but slowed. Middlesex Township Police and firefighters cleared the scene just before noon.