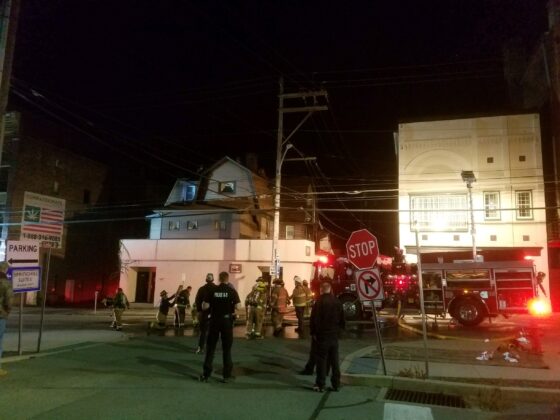 Multiple fire departments responded to a fire in the 100 block of East Cunningham St.

Multiple crews were on the scene of a fire last night in the City of Butler.

It happened just after 8 p.m. at a building in the 100 block of East Cunningham Street.

Butler City Joint Fire Chief Chris Switala said it started after a lit cigarette caught fire in a garbage can inside a 2nd story apartment. Fortunately, no one was injured.

“There was an adult and a child in the second floor apartment unit, and there was an adult in the third floor of the building at the time of the fire,” Switala said. “Everybody evacuated with no problems, and no injuries there. No firefighters were injured either.”

Switala said that even though smoke damage was limited, there was a significant amount of water damage.

He also said power was shut down to some buildings in the City while crews knocked down the fire.

“While we were working, because there were so many power lines in proximity, and we had the township aerial ladder up, we had use a temporary power outage to some of the buildings in the area while we were controlling the fire,” Switala said.

Switala said gas and water are still shut off to the building that caught on fire. An estimate of the amount of damage wasn’t immediately available.