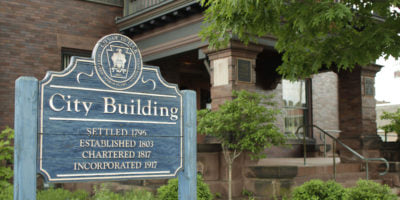 A new Front Door Security System will be installed at the Butler City Building.

At their regular meeting Tuesday night, council accepted a proposal from North Star Communications at a price of just over $5,000. This was the lowest of five bids received for the project.

This system comes with a five year warranty and this Pittsburgh-based company previously handled the city’s phone system for a number of years. The current doorbell system is not ideal and is not as secure. The new system is designed to be used by city employees in their offices.

Councilman Jeff Smith explained what visitors will encounter saying, “When you come to the city building, there is the front door, then the little vestibule, then an inner door, and then there’s the lobby.  There will be a pad, like when you go to an apartment building with three different buzzers.  One would be for Code and Zoning. One would be for the clerk’s office. One would be for the Treasurer’s Office.  So, if you wanted to go to one of those three areas,  you just push the appropriate button, they would speak with you and then they would be able to allow you to come in the building.”

The city plans on having part or all of this expense covered through funding available for COVID-related improvements. The system will be installed as soon as the company can get a crew on site to do the work.