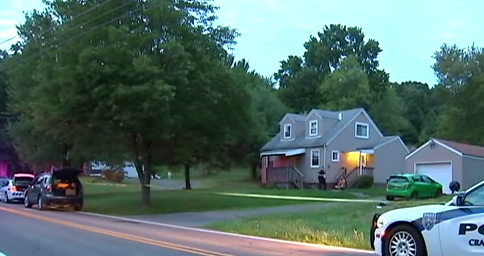 Two men have been sentenced for an alleged robbery that happened at this Cranberry Township home in 2017. Photo Courtesy: WPXI-TV

An arrest has been made in a shooting Monday night in Cranberry Township that left one man injured.

Kahlil Shelton, 23, of Duquesne was arrested Tuesday afternoon in McKeesport and is facing a long list of charges including attempted homicide and robbery.

According to police, initial reports at the scene of an attempted jewelry theft were not true. Instead, investigators say the shots were fired as a result of a drug deal that ended in a robbery. The shooting happened at a home on Marshall Drive about 7:30 p.m.

Police allege Shelton fired two shots, including the one that struck the victim. After the first shot was fired, police say other men gathered the drugs. The victim managed to flee, but as he was trying to get out of the home, a second shot was fired hitting him in the arm and torso.

Three other people were in at the home at the time, including a 6-year-old boy who was not hurt.

The victim is in stable condition.