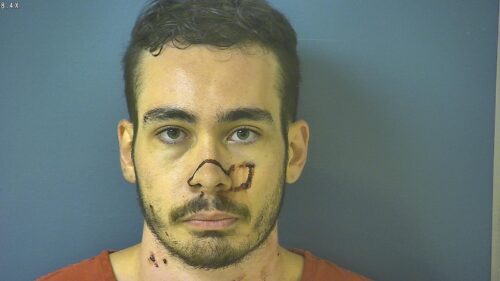 David T. Johnston, 26 of Renfrew, is charged with stealing a car and leading police on a chase Tuesday morning. Photo via Butler County Prison.

A Renfrew man is facing a number of charges after leading police on a chase in southern Butler County yesterday.

According to a criminal complaint, 26-year-old David Johnston is accused of stealing a vehicle and fleeing police.

It started around 7:30 yesterday morning, when state police received a call that a Mercedes-Benz was stolen from a home on Reibold Road.

Police soon located the vehicle on Harrison Street in the Evans City Borough and attempted a traffic stop.

But, Johnston took off on Mars-Evans City Road and was weaving in between lanes trying to avoid oncoming cars and state police cruisers.

He eventually went onto Myoma Road where police were able to box Johnston in. But, when police attempted to pull him out of the car, Johnston took off with police still hanging from the window.

However, he did not get very far due to a vehicles blocking Johnston from moving outside the box-in.

Johnston was then taken into custody. Police say Johnston smelled like alcohol, and admitted to smoking meth earlier that day.