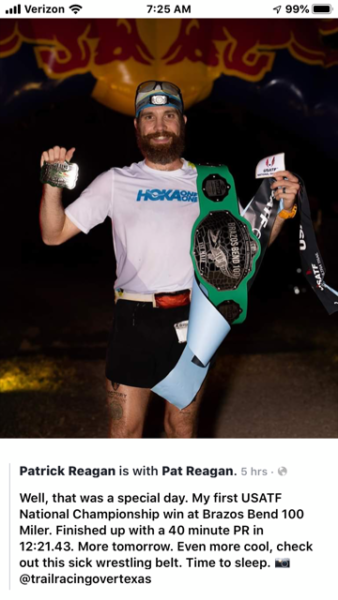 2010 Slippery Rock University graduate Patrick Reagan won the USA Track and Field “Brazos Bend 100” in December. This is a 100-mile running event held annually in Texas. It was Reagan’s first USATF national championship in a 100-mile event. He topped the field of 120 finishers by more than a half hour, finishing the grueling event in 12 hours, 21 minutes. 86 runners did not finish the event.

A professional ultra-runner, the 33-year old Reagan recently was the cross country head coach at Savannah College of Art and Design in Georgia and was the 2017 Ted Corbitt Ultra-Running Athlete of the Year.

Reagan was an All-American in cross country at SRU while earning a bachelor’s degree in Exercise Science. He qualified for for the U.S. Olympic Trials in the marathon back in 2016.