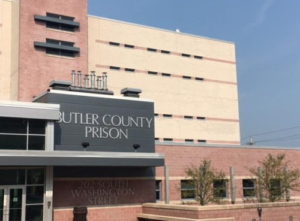 Three people are behind bars following a drug bust Friday morning in the city of Butler.

The Butler County Drug Task Force, along with the Butler City Police and a Butler County Emergency Services Unit served a search warrant at an apartment in the 200 block of North Main shortly after 6 a.m.

Police seized four packages of crack cocaine containing about three grams, about $1,300 in cash, digital scales, and multiple cell phones. The warrent was issued after an investigation into the sale of controlled substances from that apartment.

32-year-old resident Malachi “Slim” Void III has been charged with felony Possession with Intent to Deliver a Controlled Substance as well as engaging in a Criminal Conspiracy.

Police also found 21-year-old Kahlil Rippy Jr of Philadelphia and 20-year-old Khalif “Mac” Rippy of Butler in the apartment at the time of the raid and charged the pair with the same felony charges. All three men have been booked into the Butler County Prison on $100,000 bail.