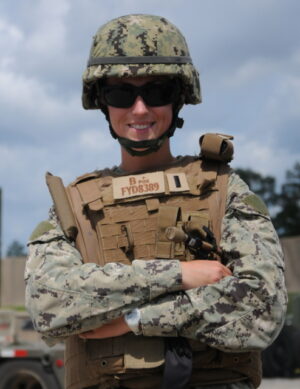 The United States Navy is recognizing a Butler County native for her role as a company commander.

Lt. Sarah Fyda grew up in Zelienople and is now part of the U.S. Navy’s Construction Force- known as the “Seabees.”

She is working in Gulfport, Mississippi as a member of the naval construction battalion center- responsible for leading the builders and steelworkers who do the vertical construction projects, such as tank pivot pads, timber towers and bunkers.

Fyda credits her success in the Navy to many of the lessons learned growing up in Zelie.

“I grew up in a small town, so I learned the importance of humility,” Fyda said.

For more than 75 years, Seabees have served in all American conflicts. They have also supported humanitarian efforts using their construction skills to help communities around the world. They aid following earthquakes, hurricanes and other natural disasters.

Fyda is playing an important part in America’s focus on rebuilding military readiness, strengthening alliances and reforming business practices in support of the National Defense Strategy.

“Our priorities center on people, capabilities and processes, and will be achieved by our focus on speed, value, results and partnerships,” said Secretary of the Navy Richard V. Spencer. “Readiness, lethality and modernization are the requirements driving these priorities.”

Though there are many ways for sailors to earn distinction in their command, community and career, Fyda is most proud of the current job she has as a company commander.

“What makes me most proud are the Seabees I serve with,” said Fyda.

Serving in the Navy is a continuing tradition of military service for Fyda, who has military ties with family members who have previously served. Fyda is honored to carry on that family tradition.

“My dad was in the Navy,” said Fyda. “He retired as a commander. He retired before I was born, so I didn’t grow up in the military, but I’m very much like my dad. We have similar traits. It wasn’t planned, and he definitely didn’t push me into the service, but in the end it’s not surprising that I wound up in the military.”

As a member of one of the U.S. Navy’s most relied upon assets, Fyda and other sailors know they are part of a legacy that will last beyond their lifetimes providing the Navy the nation needs.

“The loyalty and morale of my Seabees is contagious and motivates me to want to do a great job,” said Fyda. “It’s an honor to give back to my country, protecting my family and showing appreciation for what I grew up with.”