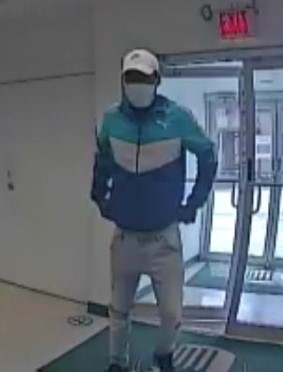 The Pittsburgh Division of the FBI and the Reserve Township Police Department are asking for the public’s help in locating a suspect involved in a bank robbery last month.

Authorities say that around 2:30 p.m. on May 27th, an unknown man entered the Standard Bank on Mount Troy Road, and gave the teller a note before leaving with an undisclosed amount of cash.  The suspect claimed to have a weapon but did not display one. No one in the bank was injured.

Officials say that the suspect was over six feet tall.  During the robbery, the suspect was wearing jeans, a white ball cap, and a blue and white jacket with a logo on the front.

Anyone with information can contact the FBI’s Pittsburgh Field Office by calling 412-432-4000.  Tipsters can remain anonymous.