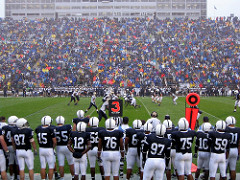 The Big Ten has announced they will not have non-conference football games on its schedule this fall. That means the Penn State vs. Virginia Tech game will not occur, and the Nittany Lions will not play host to Kent State or San Jose State in Happy Valley in September. The other sports affected include men’s and women’s cross country, field hockey, men’s and women’s soccer, and women’s volleyball. However, the conference said this plan would only be implemented, quote, “if the conference is able to participate in fall sports.” Big Ten Commissioner Kevin Warren said in making the schedule announcement, “We may not have sports in the fall.”