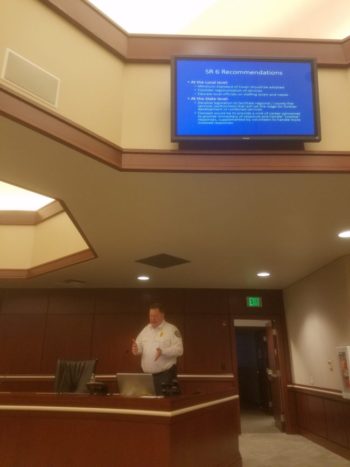 “What we’re proposing is a joint cooperation plan,” Switala said. “Essentially what we’re going to do is form a functional, combination fire service that serves Butler City and Butler Township.”

Switala and the committee recommended to begin formal discussions that would result in an equitable Butler Fire Partnership.

“I know it’s not easy on this topic, but it’s something that needs to be done in the community,” Zarnick said. “We’re quite aware of the problem we are facing here in the township.”

Although the Commissioners took no official action Monday night, they did commit to consider the information received as they continue discussions about how to move forward.

Other officials voiced their support for the joint operations plan, including Butler City Mayor Ben Smith.

“I’m not speaking for Council, but personally I’m in favor some sort of joint cooperation between the city and the township,” Smith said. “Hopefully everyone who sees this, understands the very data-driven nature of it.”

The agreement would build off the City’s full-time fire fighter staff, with Butler Township providing equipment and volunteers when needed.

“Our members have seen the proposal, and have voted on the proposal. We were overwhelmingly in favor of it,” Bestwick said.

“The whole process was driven by data, and while we all take a lot of pride in what we do, and we get emotional in some of that, we were able to check that at the door and let the data drive this process,” Bestwick said.

A plan is still several months away. Officials said the partnership could begin sometime in 2020.
tramadolcentral.com
tramadolforsale.com