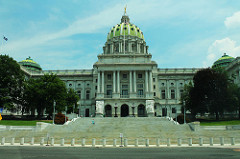 A few general election races for state offices are already set for the fall.

There will be no primary battles in the race for Attorney General, as Democratic incumbent Josh Shapiro will face off against Republican Allegheny County Councilwoman Heather Heidelbaugh.

The only contested primary for a statewide office, is for the Democratic nomination for Auditor General, in which there are six candidates.

The only Republican candidate is Tim DeFoor, who is the controller for Dauphin County.