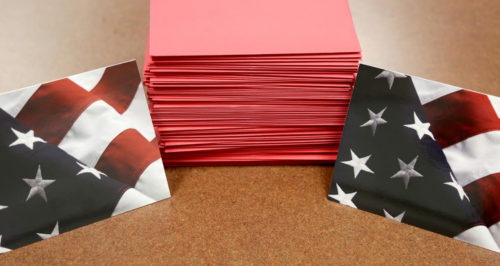 Eighty greeting cards- each featuring the photograph of an American flag and signed by a Butler County Community College faculty or staff member, student or administrator- are being presented Friday to local military veterans to mark Flag Day.

The project was spearheaded by BC3 business professor Cheryl Macon to honor the sacrifices of 60 veterans, ages 50 to 99, who are residents of VA Butler Healthcare’s Sgt. Joseph George Kusick Community Living Center.

“I have a long history of military in my family,” said Macon, a BC3 educator for 30 years whose ancestry includes a Revolutionary War major and two privates. “I was raised to respect the military and appreciate what our current servicemen and women, and our veterans, have sacrificed, and what they are doing for us.”

Macon is a paternal descendant of Maj. James Dougan and Pvts. Jacob Scouten and Theodorus Scowden, who served in the Revolutionary War. Her ancestors include those who fought in the War of 1812, the Civil War, World Wars I and II, and the Korean and Vietnam wars. Her maternal cousin has served in the Navy since 2012.

The community living center provides skilled nursing care, rehabilitation, and hospice and palliative care. Ten current residents are World War II vets- two of them were prisoners of war and two fought in the Battle of the Bulge.

The center’s recreation therapist Maryann Capuzzi said she loves the initiative because it lets the vets know that people are thinking about them, they care about them, and that there are still people out there who have a sense of what they did for the country.

Macon’s idea, Capuzzi said, “is great. It lets them know that people are thinking about them, care about them, that they are not forgotten, and that there are still people out there who have a sense of what they did for the country.”

All four main branches of the U.S. military are represented by residents living at the center, according to Capuzzi.

Flag Day dates back to 1916, when President Woodrow Wilson issued a proclamation for a June 14th observance. President Harry Truman then signed the observance into law in 1949.