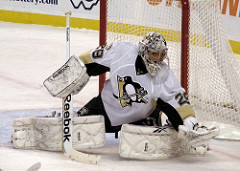 The Vegas Golden Knights have advanced into the Stanley Cup semifinals after a 6-3 victory over Colorado last night. Marc-Andre Fleury stopped 30 of 33 shots from the Avalanche. Fleury has won eight of his 12 starts in the post-season. Vegas wins the series 4-2. They will meet Montreal, while Tampa Bay will face the New York Islanders in hockey’s final four.

In the four years of the Vegas franchise, they have reached the semifinals three times.