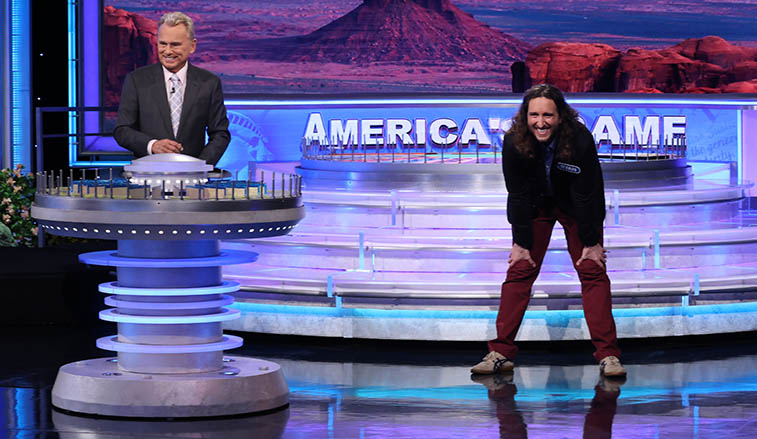 From left, “Wheel of Fortune” game show host Pat Sajak and Slippery Rock University alumnus Ryan Muldowney react to the revealing of the bonus round puzzle during Muldowney’s recent appearance on the show. Photo by Carol Kaelson, © 2021 Quadra Productions, Inc.

A former student at Slippery Rock University is celebrating a big win on a famous game show.

Ryan Muldowney is a 2005 SRU graduate and current Los Angeles resident. When the pandemic hit, he heard that Wheel of Fortune was only bringing in local residents.

“I’ve always been a fan of ‘Wheel of Fortune,’ and I thought, statistically, there’s never going to be a better chance of getting on the show,” Muldowney told Slippery Rock University’s communication office.

“I just went on their website and filled out the application and recorded a 45-second video and sent it off to see what would happen.”

Muldowney was selected and was a contestant on the April 14th episode.

After trailing the other two contestants in the game, Muldowney nearly won the $1 million prize. He missed out on two separate qualifications, but nonetheless was able to go to the bonus round.

It was there were Muldowney secured over $14,000 in cash and a trip to Costa Rica.

Muldowney is a freelance television writer and said he’s always been a big fan of the show and was thrilled to have a chance to make an appearance.

He also was a recent inductee into the Slippery Rock Communications and Media Hall of Fame for his work as an award-winning television producer with All3Media America.