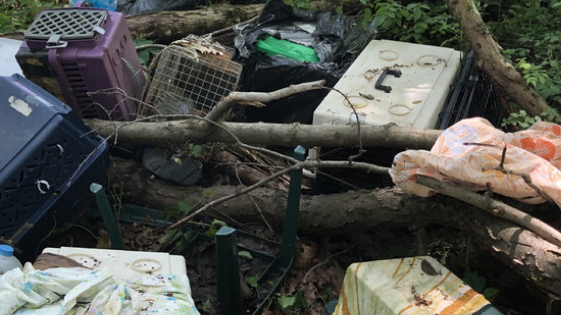 After a Butler County couple was charged in 2018 with animal cruelty, they are now facing more charges after an official discovered a gruesome scene in Winfield Township on Wednesday. Photo Courtesy: WPXI-TV

A Butler County couple is now facing additional charges of animal cruelty for allegedly leaving more than two dozen animals- some in locked cages- to die.

Last November, Kevin Delehanty of Cranberry and Tamara Rusz of Mars were charged after they were accused of abandoning six cats in woods behind their home in Cabot. Five of those cats were found dead in carriers and one was rescued.

On Wednesday, the Butler County humane officer went back to the same property to investigate another animal cruelty case, according to WPXI-TV. This time, the official allegedly found 18 dead cats and one dead dog.

Some of the dead animals were found in carriers- others were allegedly in bins and garbage bags. The property is in woods behind a home on Bear Creek Road in Winfield Township.