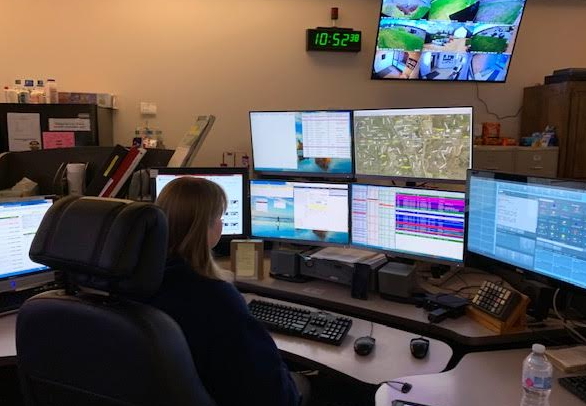 It’s Telecommunicator’s Week- part of 911 Education Month- which means we are celebrating those who answer the emergency call.

In Butler County, as many as eight 911 dispatchers are on a shift at one time inside the Butler County Communications Center in Butler Township. They answer calls from people in their most vulnerable state, and send assistance in the form of firefighters, police officers and EMTs.

Deb Bell- of Butler County- has been a dispatcher for decades.

“Over time, your skin get thicker- I guess. That’s the best way to put it,” Bell said.

She says the dispatchers each have their own styles when it comes to talking with residents on the other end of the phone. Their job is to get vital information from the caller as quickly as possible, which is often times very difficult to do when someone is frantic or hysterical.

For Bell, her hardest calls are those dealing with children.

“You get those calls where you either know this child, because they’re friends with your child. Or, they are the same age as your child, so you relate on such a personal level. Those are very hard,” Bell said. “The elderly are very hard too. It just breaks your heart.”

Shawn Pistorius, of Bruin, has been a dispatcher for 26 years.

“We joke around a lot. I think that’s how people get through the stress,” he said.

Over the years, procedures have changed and now, in many cases, the only way to get in touch with a police department is to call 911. Bell says she wished people knew that it’s OK to call.

“When you call 911, you hear us say “Butler County 911-what is the address of your emergency?”…but more than 50 percent of the time, people start apologizing,” she said. “They tell us they need to get in touch with a police department, or specific officer, and that they didn’t know who else to call. We know that. We know we’re the only contact. It just is the way it is now.”

Bell said if a person shouldn’t be talking to a dispatcher, the dispatcher will let that person know.

“You don’t have to worry about explaining at that point,” she said.

But- there are certainly times when you shouldn’t call.

If your utilities go out, call your utility company, not 911. If you have someone in your home that is dependent on medical devices that need electric, that’s a different story.

“That kind of help we can give,” Bell said.

At one given time, each dispatcher at the Butler County 911 Center is looking at seven different computer screens including live maps, but it’s still important to know which municipality you’re calling from if you’re able to. Many times, the municipality you live in is different than what’s on your mailing address.

“Everyone should know which municipality they live in. It’s the entity they pay their local taxes to,” Pistorius said. “That helps us out tremendously.”