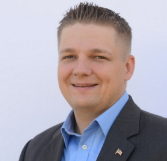 A local lawmaker is working to advance legislation that would change the parole process for violent offenders in Pennsylvania.

State Rep. Aaron Bernstine (R-10th) is participating in a press conference today at the Lawrence County Government Center regarding the situation with Keith Burley who has been charged with the murder of a child.

Bernstine’s proposal would postpone consideration of a violent inmate’s parole an additional 24 months following the inmate’s minimum release date for each conviction for a violent offense while incarcerated. The legislation would also postpone consideration for parole an additional 12 months for an attempted escape, smuggling of contraband, or retaliation against a witness while incarcerated.

Burley served a 20 year prison sentence for a robbery and shooting death. He was also charged again while in prison for assault. After being released in March, Burley is accused of stabbing an 8-year-old boy in July during a domestic dispute with the boy’s mother.