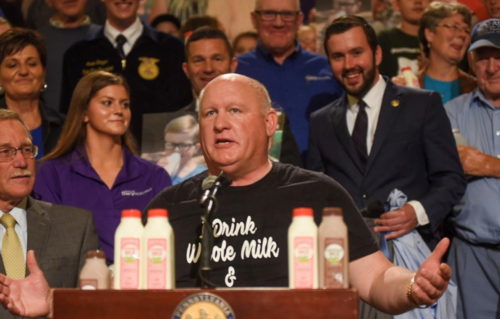 U.S. Representative Glenn "GT" Thompson joins a coalition of PA dairy farmers, industry leaders, legislators and nutritionists at the State Capitol on Tuesday advocating for Congress to allow whole milk to be offered in schools and for the enforcement of proper milk labeling. Submitted photo.

A local lawmaker is sponsoring a nationwide bill that would support grocery and convenience store workers.

U.S. Congressman Glenn ‘GT’ Thompson has introduced the GROCER Act which stands for Giving Retailers and Our Convenience Employees Relief.

The bill would establish a federal tax holiday for employees of grocery and convenience stores making less than $75,000 annually from February 15th through June 15th. This would make these employees exempt from paying federal tax on income earned during this time. The Treasury could also extend this benefit for an additional three months.

Thompson called these workers “unsung heroes of our battle with COVID-19” and said this bill would “be a simple way of saying thank you” to people playing a vital role in the national food supply chain.