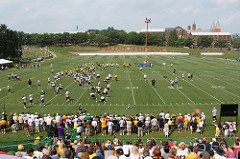 Pittsburgh Steelers players begin reporting to St. Vincent in Latrobe today for training camp. The first practice open to the public will begin tomorrow at 1:55pm. Admission to practices are free, but you must have a ticket to attend.

The NFL has announced a new media streaming platform with the Monday launch of “NFL-plus”. It will allow fans to view out-of-market preseason games on all devices, as well as local and national regular-season and post-season games on mobile devices. It will also allow access to team and national radio feeds along with NFL Network contents. This will be an upgrade of the “Game Pass” service that has been available to fans in the United States since 2015. The package will be available for $4.99 a month or $39.99 a year. A premium package will cost $9.99 a month of $79.99 a year which will include full and condensed game replays as well as coaches film from each team.