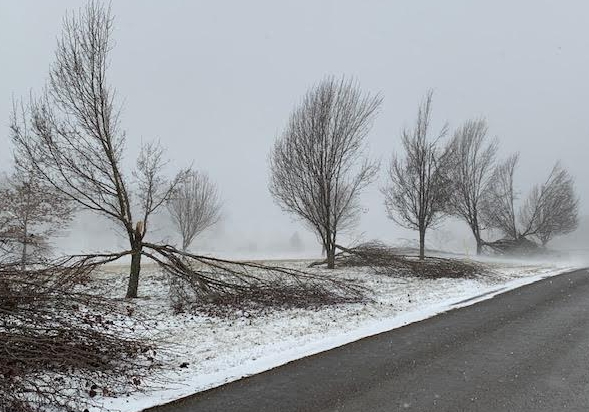 A Wind Advisory remains in effect for Butler County through 4 p.m. Wednesday. There were six trees along a property line in Summit Township on Wednesday that appeared to be sliced down the middle, but reports indicate this damage may have been from an ice storm back in November. Photo: Butler Radio Network

Most parts of Butler County received a light dusting of snow overnight and waves of snow continue to fall, but it’s the wind that will likely get your attention on Wednesday.

Butler County is under a Wind Advisory through 4 p.m.

The National Weather Service warns of sustained southwest winds of 15 to 25 miles per hour, with max gusts between 40 and 50 mph.

“Gusty winds will blow around unsecured objects. Tree limbs could be blown down and a few power outages may result,” according to the NWS.

There haven’t been any reports of widespread wind damage, but some residents have reported downed trees and limbs in their yards. At least one Summit Township mobile home nearby also reportedly saw wind damage.

At one point Wednesday morning, there were about 200 West Penn Power customers in Butler County without service.

The majority of the affected customers were in Fairview Township. A handful of other customers throughout the county were in the dark. Most of those outages have since been repaired.

Earlier, about 50 Central Electric Cooperative customers were without power, but those outages have also since been repaired.