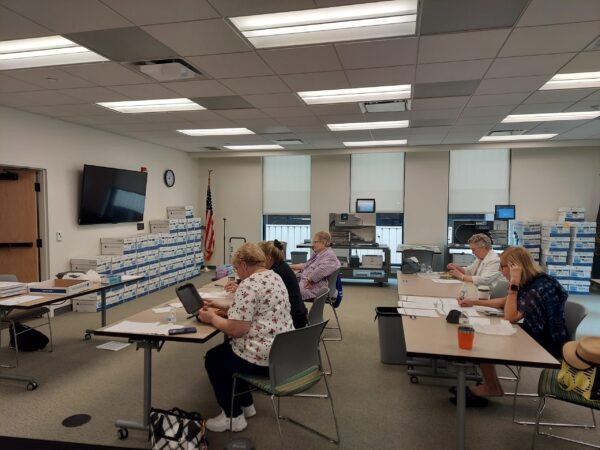 A group of election workers ready for a hand county of results from Donegal Twp.'s 2020 election results.

Butler County’s review of the 2020 election is continuing this week.

County Solicitor Wil White says they finished the review of the Butler City 4-1 precinct and found the results were 99.9 percent accurate between the hand recount and the machine.

In the Butler City 4-1 precinct, there were exactly 600 ballots cast in the 2020 election. White says there was only one mistake made during the first recount, and found that it happened during the hand recount. He says the machines have been “dead-on accurate” so far.

He also noted the immense time difference between the two processes. On average, it’s been taking around an hour to hand count 100 ballots; meanwhile on the machine it takes around three to four minutes.

That means to count all of the 600 ballots by hand, it took election workers four hours and 59 minutes. Compared the machines that took care of the count in less than 13 minutes.

The workers, who all have election experience as poll workers, judges of elections, or inspectors, described the hand counting process as “tedious” and “time consuming.”

Right now the group is reviewing the results from Donegal Township—White expects that to be done by this week.