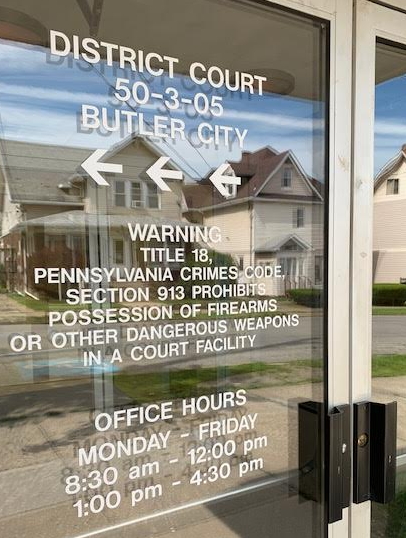 Magisterial Judge William Fullerton's office on West Cunningham Street in the city of Butler will be one of the county's seven district justice offices to have bullet proof teller windows installed. Photo: Kayla Molczan_Butler Radio Network

During a regular Butler County commissioners meeting on Wednesday, Facilities and Operations Director John Campbell opened bids from three companies for the work. All bids came from companies out of state.

The lowest came from a company called “Ready Access” out of Chicago for a cost of $38,600. The other two were from Covenant Security Equipment of Indiana for a total cost of $48,000, and Creative Industries of Indianapolis for a cost of $57,000.

The bids were tabled and will now be reviewed, before a contract is awarded.

Butler County Deputy Court Administrator Tom Holman said in an interview earlier this month that this effort is being done at district judges’ offices across the state to increase security.

“The state has been- for some time- trying to upgrade security in district justice offices across the state,” Holman said. “We have already done a great deal- with the state- by installing cameras, ballistic panels and other security measures within the offices to try and make them as safe as possible for the people that work there.”

In total, 17 windows will be installed within the counties seven district justice offices. The bullet-proof teller windows will be built with a polycarbonate glass that includes a six-inch bullet-resistant speak hole so the customer can hear the teller.

“The bullet proof windows will be installed (in the Butler County magisterial district judge offices) where the current windows are now,” Holman said in an interview with Butler Radio on June 13. “Where people would walk up to pay fines or fill in forms.”

No county money is being used for this project. The funding will come from a state grant from the Administrative Office of the Pennsylvania Courts.

All three Butler County commisisoners were supportive on Wednesday of the bullet-proof window installations.

“In today’s environment, the safety of our staff is of upmost importance,” board chairwoman Leslie Osche said.

Commissioner Kevin Boozel noted that some of these magistrate offices are in secluded areas, which may not be covered under a municipal police department- meaning it could potentially take state police some time to respond would there ever been an incident.

In September 2018, four people were shot at a magistrate’s office in Fayette County by a gunman. A police officer was among those wounded.

The suspect was shot and killed by police. The shooting was believed to be related to an ongoing domestic violence situation and that the shooter was targeting his wife.