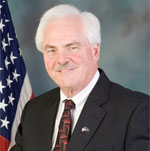 A local lawmaker is taking a leadership role in trying to get a Republican candidate elected to United States Senate.

The campaign of Jeff Bartos recently announced that Republican State Representative R. Lee James has been named as the Campaign Captain for Butler County.

Each county in the state has a designated Campaign Captain who will be tasked with organizing grassroots support for Bartos as he attempts to win the Senate seat currently held by the retiring Pat Toomey.

James represents a portion of local residents in the northeast portion of Butler County as part of the 64th Legislative District.