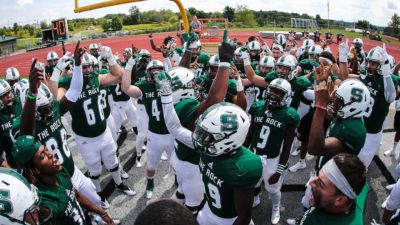 The Slippery Rock University football team has been ranked seventh by both Street and Smith and Lindy’s Sports when the two publications announced their Division II Preseason Top 25 in their collegiate football preview magazines. The No. 7 ranking in each poll is the highest preseason ranking either publication has assigned The Rock since 2002. The Rock is the only school from the Pennsylvania State Athletic Conference to be ranked in both polls. West Chester is ranked #15 by Lindy’s and IUP is ranked #23 by Street and Smith.