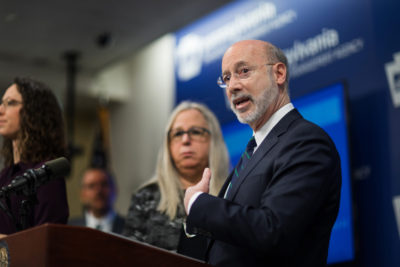 Governor Tom Wolf is responding to the judge’s ruling earlier this week that deemed his coronavirus shutdowns unconstitutional.

“I believe the vast majority of Pennsylvanians understand what we had to do in the beginning was necessary to buy the time to keep people safe before we got the capacity needed to address this virus,” Wolf said.

“The vast majority don’t buy into the conspiracy theories or fear-mongering from the President, or Harrisburg Republicans, about this virus.”

Wolf has appealed the case and says he’ll take it as far as necessary.

Wolf also says that while he has made some mistakes, he feels confident in his administration’s response.

“In hindsight, would I have done anything at all differently than I did? Sure, we’ve learned a lot of things about the pandemic,” Wolf said. “But, I am not in a position, and would never follow the irresponsible demands of the President or the Republican legislature. Absolutely not.”

The lawsuit was led by Butler County, although they were dismissed as a defendant in the court.